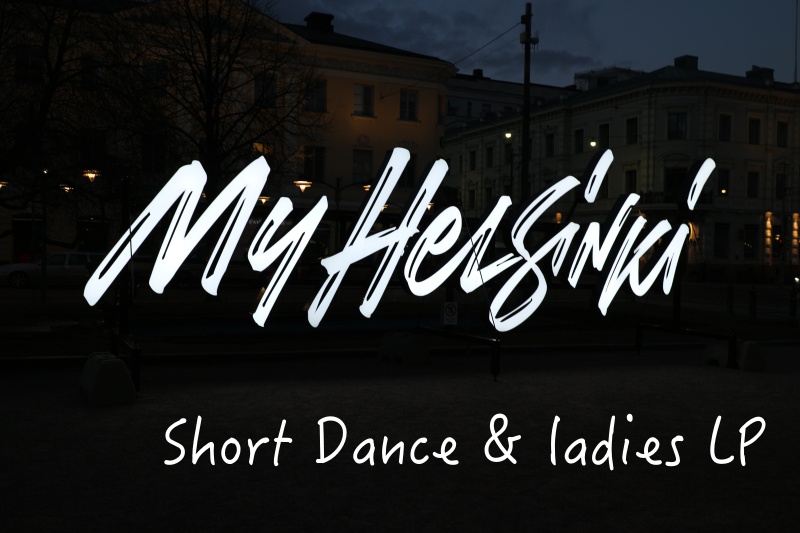 We could not believe our eyes at breakfast: after two days with picture perfect (but cold) weather, it was actually snowing. Yet, I must admit that I kind of liked this weather. I looove snow and the climate in Helsinki was just so much better for my allergies.

It has never been our plan to watch the complete SD. But we arrived almost on time at the rink, anyway – even though we went by tram (and not the faster train) that day. Maybe, we would have stayed in bed instead, if someone had told us beforehand about K.’s joke from yesterday becoming true. We had wondered about which music would be used during the SD (shows you how well-informed we are these days…) and we had laughed real hard at K. suggesting a combination of Blues and Hip Hop. Oh well, the first two couples used EXACTLY this combination. I still can’t believe it and to be honest I don’t know how I survived sitting through over 20 „Blues combined with something else“ short dances. Especially as I already hated the good, old „Midnight Blues“ CD. I demand the comeback of the „Yankee Polka“! And yes, the Polka OD from the 1991-92 season is my favourite OD of all time. There should be more Dirndl and Lederhosen in ice dance…

Smart & Diaz were the only dancers of the first few groups who were able to hold my attention. Apart from this, I took helpful notes like „the Belorussian guy is rocking a see-through shirt“ or „the costume of the Georgian guy looked like a copy of Evgeni Platov’s ‚You’ll See‘ costume“. I was suffering from such a huge Blues overdose, I even mentioned I would have preferred watching Rauer & Rauer’s „One Night in Bangkok“ FD or Vernekohl & Kurakin’s „Shakira“ FD…

The Polish girl changed her costume before the Hip Hop part (on-ice costume changes seem to be quite en vogue these days) and suddenly, I found myself wondering what Kauc & Zych are doing these days?! Would Ziggy have enjoyed today’s ice dance (RIP)?

At least, there was some eye-candy present: Nicolai Sørensen vom Danemark is quite hot. Moreover, I have seen Ilia Tkachenko for the first time at 2007 Junior Worlds and he is still an example for my type of ice dancer: a tall guy with good posture.

It was the first time ever I’ve seen Virtue & Moir skate live and I liked the first part of their SD but the rest was still … Blues.

Alexandra Stepanova looks like she could be a model and little Bukin has some Bukin in him which makes them quite the nice couple. Which led to me thinking about what my three favourite FDs of all time are. The result: 1) „Air“ by Klimova & Ponomarenko, 2) „The Feeling Begins“ by Grishuk & Platov and 3) „Polovetsian Dances“ by Bestimianova & Bukin. Looking at this result, what would make ice dance great again for me? Tarasova doing some choreo…

And what is K.’s and my summary after this SD? We could have saved us watching the whole thing because our favourites are still the two SDs we had already seen at Nebelhorn this past September: Gilles & Poirier’s Blues and disco combiantion where he looks like Tom Selleck’s long lost brother and Chock and Bates‚ program to some not so unnerving Blues music, including some cool moves performed by them.

BTW, I don’t want to offend anyone. If you love today’s ice dance, good for you. I on the other hand can’t help myself sounding like the rabid fans of Torvill & Dean I never wanted to be like. Oh, the good old times…

We treated ourselves to some pizza during the break before the ladies LP. The waiter at the pizza place looked like a Russian tenor (you know, like the guys Anna Netrebko is dating) but actually surprised us by speaking German.

I just wish there would be more girls choosing music like Laurine Lecavelier did with „Grease“. Her program totally stood out because she was skating to some fun, upbeat music.

Free WLAN at the rink is nice but it also leads to people staring at their phones instead of watching the skaters on the ice. I found some lady sitting next to me during ladies LP quite rude because she did this pretty much the whole time during the early groups.

Everything comes again, I guess. Like Sarah Brightman’s „Adagio“ which was interpreted quite passionately by Loena Hendrickx. Now, I’m patiently waiting for the comeback of „Time to Say Good-Bye“.

I really like Ivett Toth but, unfortunately, she followed the example of her coach Yulia Sebestyen at the LP here in Helsinki and popped and aborted several of her jumps.

Mariah Bell’s „East of Eden“ LP totally made me think of Michelle Kwan.

Mai Mihara skated a perfect and very cute LP and whole Japan went wild for her.

Have I already mentioned that everything comes again? This is also true about „Riverdance“ and toe-steps (as performed by Rika Hongo).

The flower girls wore blue and when I saw tiny Elizabet Tursynbaeva in her blue dress that night, I thought she was one of them. She was actually smaller and I wondered what Carolina feels like when being on the ice alongside her. Like a mommy? Elizabet Tursynbaeva had a good skate and made me think of two very young skaters from the past who had also worn a blue dress: Oksana Baiul (at Worlds 1993) and Tara Lipinski (at Olys 1998).

At first, I was a bit heart-broken about Carolina Kostner not having a clean skate. I’ve always dreamt about seeing her do a perfect LP but I’ve mostly only been able to watch her do disastrous stuff like at 2005 Euros, instead. In the end, it was okay, I think, because she moved up in the standings and it was such a beautiful program choreography-wise.

The last group was an emotional roller coaster ride and that’s the reason why I barely took any notes (unlike during the SD…).

I had tears in my eyes after Anna Pogorilaya’s disastrous LP. I like her so much and it was heart-breaking to see her fall all over the place. But I also think one must really give her credit for never giving up and trying again and again. The support she received from the audience warmed my heart, too. One of the best crowd reactions ever.

Evgenia Medvedeva was simply mesmerizing. Everything she did was so perfect (and this after her two teammates had bombed which I’m sure she must have seen/sensed before her skate). I’m very happy I saw this live. One of the skating moments I will never forget in my entire life. Just amazing.

The two Canadian girls Kaetlyn Osmond and Gabrielle Osmond were very good, too. I had feared pressure could be too much for them and they could go down a similar way like Josee Chouinard at 1994 Worlds (not sure about the year, she was placed in the top three after a wonderful SP (where she wore a cute blue dress with flowers) but bombed in the LP) but they were able to hold it together and brought home silver and bronze to Canada. What a great surprise!