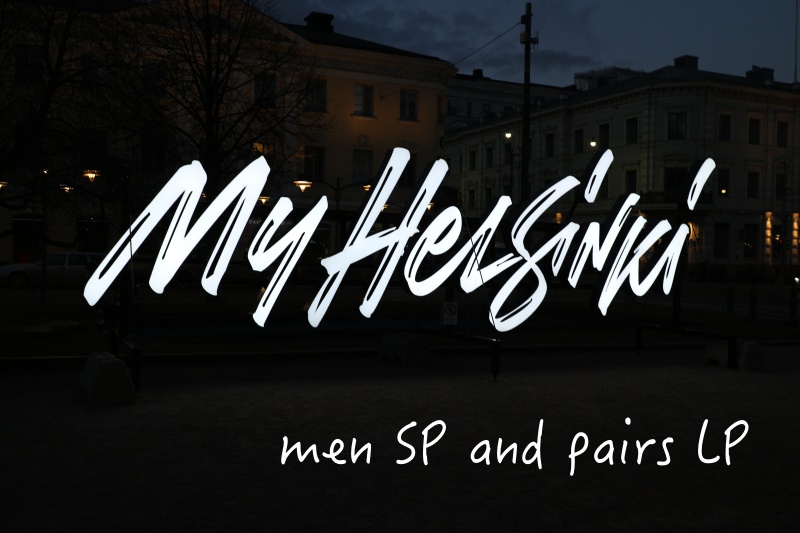 Even though we didn’t plan to do so, we arrived in time for the first group of the men SP and I recognized them all: Igor Lukanin, Anthony Liu, Michael Hopfes… The coaches, not the skaters.

Martinez and Yee (two more regulars from Nebelhorn) were as consistent as ever and Kevin Reynolds impressed us with his spectacular hair looking like a super dry-blowed haircut straight from the 80’s. He skated to Finnish folk music and performed a flawless program even though he is still lacking something in his overall skating.

Alexander Majorov (who was still a little boy in my memory) skated to Finnish folk music, too. The audience loved this, of course, and he also skated without a mistake.

Moris Kvitelashvili made me smile because he skated to a song straight out of the 90’s: „What Is Love“. I wish more skaters would make good use of the new music rules and try something new.

Brendan Kerry from the upcoming skating super power Australia did a great performance to „Singing in the Rain“ which made me think of Kurt Browning.

Apart from this, group 3 could have been a Euros competition from the 90’s because it had Urmanov and Zagorodniuk as coaches.

I met Dorota Zagorska with Mariusz Siudek and their son at one of the food stands and had to smile because we had seen a picture the night before which had made us think that Dorota had aged very badly. In reality, it had not been Dorota in the picture with Mariusz and their son but probably the granny…

When you watch Deniss Vasiljevs‚ skating, it’s obvious who his coach is. The way he moves his body, the way he holds his head – it looks just like Stephane Lambiel. Surprisingly, people seem to be more positive towards this combination than Joubert looking like Yagudin. I just hope Deniss didn’t receive too many gifts on which there was written „please, pass on to your coach“…

We were kind of shocked when we saw Stannick Jeanette: he looks about twice as big as he did when he was still an active skater. He also is bald now and looks more like Scott Hamilton than his former self.

I absolutely loved and adored Misha Ge’s „Liebestraum“. So balletic, so many beautiful arm moments. He just stands out from the rest of the skaters and I was so happy he made a music choice against the trend of Blues and Jazz.

Mikhail Kolyada’s cheeks made me think of Ilia Kulik. He performed a great Tango SP.

Finally, there was the quad lutz Michael Weiss had promised a looong time ago: done by Boyang Yin during his funny „Spiderman“ program.

As much as I like Denis Ten, after his SP it became obvious that one quad is not enough anymore…

Who in all world chose Nathan Chen’s SP music? The first part of bombastic, classical music was way too heavy for this kid. Besides, he fell on the 3 axel.

Michal Brezina celebrated his birthday that day and had a better skate than I had seen him do in a long time. He only fell on the 3 lutz.

Yuzuru Hanyu’s SP to music by Prince could have been epic without his mistake. But he still rocked the ice and I really like this program.

Shoma Uno couldn’t impress me with his skating during the SP. Yes, his jumps were great but I thought the classical music he had chosen didn’t fit his style at all. He actually reminded me body-type-wise of Elvis Stojko… But I can already reveal that I liked him much better in the LP and exhibition. There, he also looked much cuter because his hair looked way better.

Maxim Kovtun left the impression of something being wrong with his leg during the warm-up. This considered, he had a rather solid skate.

Javier Fernandez had a picture perfect skate to „Malaguena“. But I must admit he has always left me cold and it was the same here. Sometimes, it just does not click with a certain skater.

Patrick Chan is another example for a skater who has never been my type. But here, I actually liked his SP to „Dear Prudance“ (including bird noises).

I admire Jason Brown for the overall quality in his skating and how he usually delivers when it counts. He just looks sooo smooth… And I love the way he carries his free leg after landing a jump. Also kudos to him for staying up there without a quad.

We made good use of the break before the pairs LP by going back to the city center. This time, we gave „Joe and the Juice“ a try and had a very yummy avocado sandwich there. They had a charming sign asking for tip: „Leave us some money for Mika being able to afford Tinder Pro. Instead, you can also leave your phone number.“

The first group produced solid skates and showed it was a good idea to cut down to 16 pairs teams. No more shaky lifts and only double throws and jumps in the finale. No more Rennik & Saks moments…

I was happy it was a conciliatory ending for Stolbova & Klimov. Hopefully, they will get their act together for a (final) successful Olympic season next year.

Sometimes, I really don’t understand the music choices of skaters. Finally, lyrics are allowed and what do skaters and their choreographers choose? Good, old „Love Story“ with lyrics…

Seguine & Bilodeau had such a lovely LP here in Helsinki. I hope they have a bright future lying ahead of them.

Marchei & Hotarek rocked the house after a few rough skates with their „James Bond“ LP (to music by Adele who isn’t actually one of our faves). I felt so happy for them having such a great competition here in Helsinki after one or two rough seasons. I think one can’t admire Valentina enough for her transition from single to pairs skating.

Yesterday, I was talking about music by Patricia Kaas as a new possibility for a skating program. Today, my wish (joke) came true… I don’t think it was the perfect choice for Duhamel & Radford who  should be better of with some more upbeat music. Today, they looked heavy on their feet, probably due to his injury.

Tarasova & Morozov had – especially considering her injury – a solid skate with one wobbly lift and and one messy throw. I always have to smile when I hear their „Music was my first love“ because it’s just so 80’s (used by Rigel & Nischwitz back then and later by Berezhnaya  & horrible Shliakhov). I was so hoping they would not place 4th in the end.

Yu & Zhang’s LP had some very … mediative music and were therefore not able to hold my attention.

Savchenko & Massot produced a very good skate but I must say I’m not a fan of the thrown 3 axel. Even if she hangs on to the landing like she did here, it breaks the flow and perfection of the program.  The big support they received from the crowd every time they stepped on the ice here, made me wonder if them representing an obscure skating country plays a role in this…

Sui & Han were flawless during „Bridge Over Troubled Water“ except for her falling on one SBS jump. I was really happy about them finally being able to win the gold medal. They totally deserved this.

The pairs LP wasn’t as well skated as the pairs SP but, yet, enjoyable to watch.